It is easy to breeze over Paul’s great declaration in his letter to the Ephesians where he says, “He chose us in Christ before the foundation of the world to be holy and unblemished before him in love” (1:4). We hear that God created a “plan of salvation” so we could all go to heaven. But Paul has something far more beautiful in mind!

For starters, this larger context (v.3-14) is one long sentence in the Greek; almost as if Paul is trying to overwhelm his readers with the wonder of his Christian worldview. And at the very core of his perspective was this amazing reality that God was determined to father children, to provide for them and help them grow up to look a lot like Him; that in Christ God had begun to recreate the family He had wanted from the very beginning of creation! 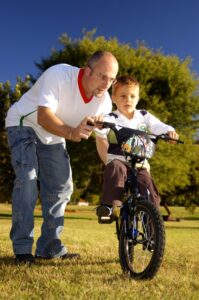 That is why Paul can say this all began “before the foundation of the world.” This was the whole reason for creation in the first place! And when Paul says God “chose” us, he uses a form of this verb that we might easily miss because we don’t speak New Testament Greek! You see, in English, we allow our verbs to have one of two voices: active or passive. As a team captain, I can “choose” my team mates (active); or as a potential team mate I can “be chosen” by a captain (passive). In NT Greek, they also have a middle voice, which is sort of a combination of the two; an action that impacts the one acting. For example: What do I want for breakfast? We have eggs, oatmeal, granola, and a few other options. “I choose eggs” could be written in the middle voice, meaning, “I choose eggs for myself.”

What’s really interesting about “God chose us in Christ” is that it is in the middle voice. God chose us for Himself! No doubt, God had a lot of choices at the time. He could have chosen to spend His time creating more life forms on other planets; or ending the Great Rebellion that was started by Satan; or simply enjoying Himself in heaven. But God chose instead to have a family for Himself. He wanted to become a Father!

In this present age, God has moved heaven and earth to re-create the family He had always wanted. And He has chosen us for Himself: to Father us, love us, provide for us, and to nurture us and mentor us until we begin to show a family resemblance.

We were not simply selected out of humanity to go to heaven when we die. We were chosen by God because He gets a great deal of joy out of being a Father! (notice the “good pleasure of His will”).